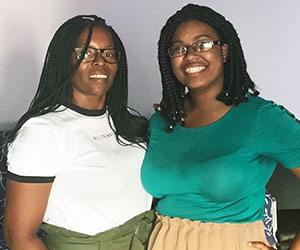 “On 26 May 2019, I left home to embark upon my first study away journey to study psychology in Madrid, Spain. Even with the plane ticket in hand, it was hard to believe that I had been preparing for this moment for at least six months,” recalled Virginia Wesleyan senior Monique Ayers. “The most challenging part in the preparation was the anxiety that came with it. I was constantly worrying about acceptance and if people would like me since I was black.”

Trepidation mounted in the weeks leading up to departure. Ayers remembered that her anxiety “got so bad that at one point I changed my mind about studying abroad.” As an African American and first-generation college student, Ayers said that she “struggled early in life.” Studying abroad had been her dream since she was a child, even though no one in her family had ever traveled abroad. In fact, Ayers did not know many people who had been abroad or anyone who had studied abroad. She was embarking on unchartered territory, including her first plane ride. “All of my life I had dreamed of traveling the world, but I thought that for someone like me, that would be impossible. I kept going because sometimes you just do not realize how much of an impact studying abroad will have on your life.”

As she prepared to study abroad, Ayers was concerned about how Spaniards would react to her as an African American woman. “I thought that being black would affect my study abroad experience because I had heard a lot of stories about racism around the world, especially in places where people may not be exposed to people with different backgrounds. I was very worried about standing out due to my skin color.”

In Spain, Ayers explained that she personally did not encounter racism. “To my surprise and happiness, I did not experience any of the racism that I thought I would experience!” Racial identity, however, is far more complicated in Spain than Ayers had understood as she set out on her journey. For example, she was surprised to see Spaniards wearing braids similar to those that African Americans sometimes wear. “I thought to myself how strange, yet it was very appropriate.”

Much to Ayers’ surprise, her Spanish host mother was black. “I realized that even though she was black, her life experiences were different than mine. I found this very interesting.” Ayers explained that her host mother “didn't see herself black. She just saw herself as Spanish. So being a woman of color in Spain did not seem significant to her.”

While Ayers did not personally experience racism in Spain, one of her Asian-American friends did. Ayers recounted that her friend “got various side looks and people walking up to her saying ‘Ni-hao’ (‘hello’ in Chinese) in a very teasing, provoking way. Even though it was not directed at me, I was still hurt as if those looks and comments were directed towards me.” She reflected that “I recognize that everywhere I go, there will be some racism. But you just can't let that stop you from living your life.”

Ayers elaborated on the transformative impact that study abroad had on her. “Studying abroad allows you to gain extraordinary, unexplainable experiences. You learn another language, meet different types of people, and build upon your interpersonal skills and confidence. You also learn how to adapt to unfamiliar lifestyles and circumstances.”

Ayers is currently continuing her studies in psychology, focusing on cross-cultural relations. “I see myself working with people, particularly children, across borders.” She also has plans to study abroad again, perhaps in the United Arab Emirates or an African country.