Discovering a Passion for Sea Turtles through an Internship and Research 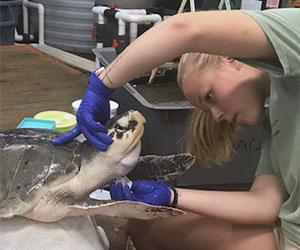 For biology major Annika Christenson, one of life’s most thrilling moments happened last summer when she helped a batch of sea turtle hatchlings emerge from their nest. She recounted, “I had never seen sea turtle hatchlings before. One morning, I got a call that three hatchlings had crawled out of the nest, so I got in my car and drove immediately to the site. I watched these hatchlings make it to the ocean, all the while watching the sunrise. I could not have pictured a more perfect moment. We excavated the nest a few days later, pulling out seventeen more hatchlings, which I later helped to release into the ocean. It was one of the coolest experiences I have ever been a part of. I will never forget watching these tiny (smaller than a cookie) turtles get washed up by the waves.”

Christenson’s work with the sea turtle hatchlings was part of her internship at the Virginia Aquarium & Marine Science Center. Working with the Aquarium’s Stranding Response Program, which aids marine mammals and sea turtles that come ashore in Virginia, Christenson conducted research that examined trauma on sea turtles’ shells or carapaces, largely due to vessel strikes.

Christenson’s relationship with the Virginia Aquarium & Marine Science Center dates from 2017 when she volunteered there as a first-year college student. She explained how volunteering helped her to discover her passion. “By volunteering, I not only started learning at the beginning of my college career, but I also got to feed turtles, go out on responses, and assist with wound care and necropsies. By volunteering I realized how much I love this stuff and that I would love to make a career in this field.”

The internship was not without its challenges, however. As Christenson maintains, studying sea turtles raises a host of ethical questions about how to respond to injured animals. “We had multiple cases of sea turtles that came to our facility still alive but severely injured. These cases struck up interesting ethical conversations about what to do for the turtles.” Contemplating such ethical concerns, Christenson’s next project is to design a research protocol to evaluate the viability of rehabilitation in light of the injuries.

By undertaking an internship, Christenson explained that she grew personally. “I went into my internship afraid that I did not know anything. But within a month, I knew more than I could have ever anticipated, and I continued to learn each and every day. This realization pushed me out of my comfort zone and let me learn through real life experiences. It also helped me to appreciate learning. I realized how much I love what I am doing, which made me want to learn everything I could.”

In fall 2019, Christenson followed up her internship with research at Virginia Wesleyan University under the mentorship of Biology Professor Soraya Bartol and the Stranding Team’s Research Coordinator Sue Barco. Christenson’s participation in Virginia Wesleyan’s Undergraduate Research Program reinforced her commitment to working with sea turtles. “My research helped me realize where my passion lies. I always knew that I loved the ocean, but I never could have imagined that looking at dead animals or giving fluids and injections to marine animals would be what I want to do every day of my life.” She elaborated, “I want to do something that brings a smile to my face, which I have now found through my internship and research.”

When asked what advice she would give other students, Christenson stressed the importance of taking risks. “Find something you are passionate about it, and absolutely go for it! It is better to try something and not like it than to never try it in the first place and regret it later.”