Internships Prepare 2019 Grad for Next Chapter 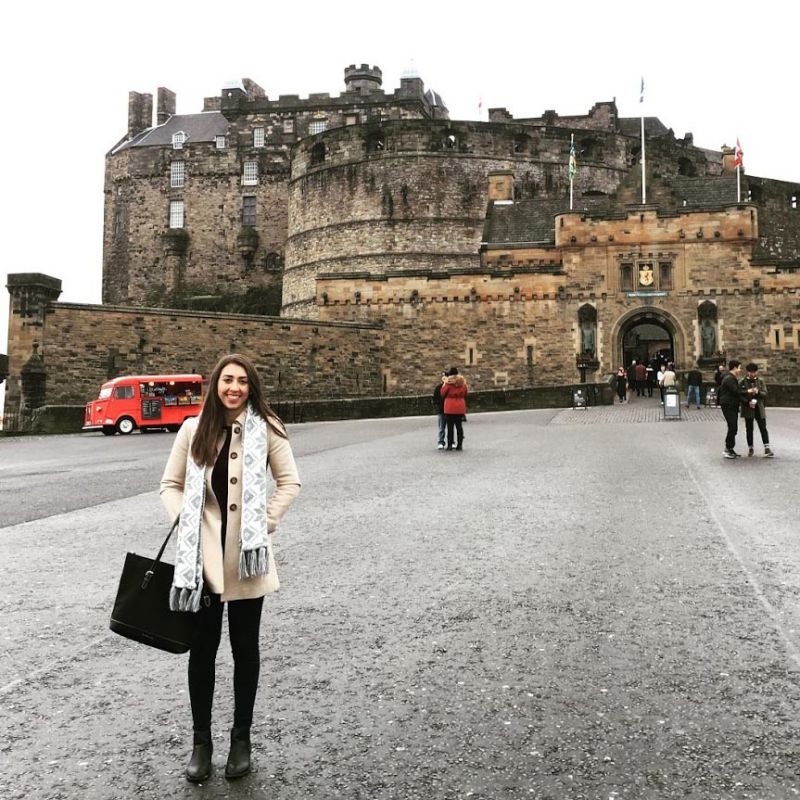 Downing first came to Virginia Wesleyan in 2015, for the opportunity to play soccer for Coach Jeff Bowers. The Marlin midfielder has been a part of the team for four years, earning accolades such as third team All-Old Dominion Athletic Conference (ODAC) and All-ODAC Academic Team. She has also worked for the VWU Athletics Department, assisting with taking photos, recording statistics, and working the shot clock. In addition, she is a member of the Political Science Honor Society.

Downing credits a course, Intro to Comparative Politics, taught by Assistant Professor of Political Science Antje Schwennicke, as the most influential course she had at Virginia Wesleyan. That course, during her sophomore year, changed the trajectory of her studies and sparked her interest in studying away. As a result, she applied for a semester abroad as a Global Scholar and chose Scotland as her country, because she wanted to see "how a parliamentary system works." The program offered her the opportunity to do an internship with Scottish Parliament and she was beyond excited about that.

“It was my first class focusing on international issues which influenced my decision to go abroad which completely shaped the rest of my college career and future plans,” said Downing. “Dr. Schwennicke has been a great advisor and professor during my time here at VWU. I found her classes to be interesting and she was always willing to help in any way she could.”

“Julia is an extraordinary student and a great example of how a liberal arts education can inspire you to do things you did not even know you wanted to do,” said Schwennicke. “Honestly, her interview for the Global Scholars scholarship was amazing to witness for me, because she took so many things she learned in my class and applied them to the country of her choice, and really did her research about all of the things you could know about Scotland. And when she came back, she talked to our POLS 111 Intro to Political Science class as a guest speaker about her experience, and I think she passed on that enthusiasm about political science and study abroad to many other students.”

For four months, during spring 2018, Downing lived in campus housing at the University of Edinburgh, an ideal setting for the self-proclaimed Harry Potter geek. She said the experience gave her more insight into the policy side of politics. During her time there, she traveled all over the country and to Northern Ireland, Spain, Germany, and the Netherlands.

“Edinburgh is beautiful," she said, "full of history and charm. The Scottish Gaelic background is rooted in folk tales—everything that happened there has an interesting story behind it.”

She said that most of her internship was spent reviewing policy, writing speeches, and conducting research. She was also able to experience first-hand the ins and outs of a parliamentary system while learning what makes a government function.

After her study abroad experience, Downing secured an internship at a local military law office in Portsmouth, where she has worked for the past year.

What’s next? After graduation on Saturday, Downing is excited to be heading to Washington, D.C., to work as a counterterrorism analyst intern for The Counterterrorism Group, a subsidiary of Paladin Security. She says that her internship with Scottish Parliament helped her expand her knowledge of international politics and events, and her internship working for a military defense attorney gave her a new perspective on national defense which allowed her to secure this new position with The Counterterrorism Group.

“Julia is a great example of all the things you can do at Virginia Wesleyan, and I am very proud that I was able to be part of her journey,” said Schwennicke.

Read more about the 2019 Commencement Ceremonies and experiential learning opportunities at Virginia Wesleyan.