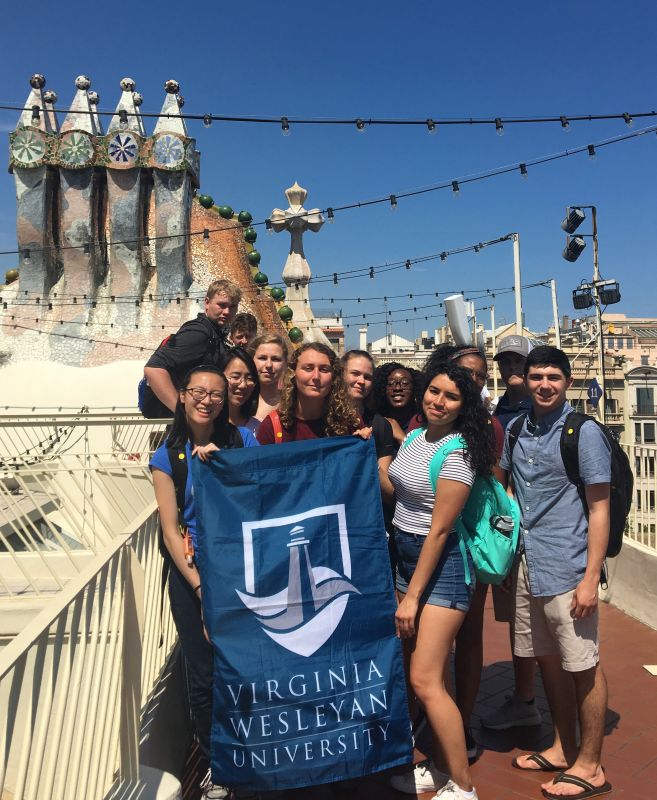 Sara Sewell, professor of history and executive director of The Lighthouse: Center for Exploration and Discovery and the Quality Enhancement Plan (QEP), traveled to Barcelona, Spain this month with fourteen rising sophomores in the first cohort of the Batten Honors College (BHC). The students were enrolled in Sewell’s 4-credit summer session course, “The People and Cultures of Barcelona,” the first faculty-led study away course for this group.

”One of the fundamental tenets of the University's QEP is providing students with introductory experiential learning opportunities as springboards for more advanced experiences,” said Sewell. “By studying away in a course taught by a VWU faculty member, students gain the confidence to study abroad independently for a semester or more.”

To prepare students for an optimal experience, the course began on campus with students meeting for class for four days prior to departure. During those sessions, the students studied Catalonia, Catalan identity, and the Catalans' efforts to secede from Spain.

“As part of the QEP and the development of the SAP, all students who enroll in study away courses are required to attend a pre-departure workshop that focuses on intercultural learning,” noted Sewell. “Pre-departure instruction also addresses a panoply of travel concerns, such as flying on a plane for the first time, health & safety, and money management.”

While in Barcelona, the students attended class for at least four hours every day. The first two hours were spent in the classroom, mainly discussing the day's readings, and the rest of the day was focused on experiencing Barcelona at various sites.

Sewell said that this course contained many moments when the activities did exactly what one would hope for from a study away course in an honors curriculum.

“The activities in Barcelona profoundly challenged and touched students intellectually, culturally, and personally, while prompting them to rethink their views and consider ways that they can make a difference in our world.”

She noted that the students were most moved by a tour of Barcelona from a homeless man.

“After spending 10 days in Barcelona at many tourist sites, the Street Life Tour, enabled them to see Barcelona from a very different perspective. The tour challenged everything students had previously believed about homelessness, and it helped them to see a hidden side of Barcelona that the millions of tourists who flock to Barcelona overlook.”

Their activities included visiting famous sites, such as Antoni Gaudí's Sagrada Familia; connecting with the community by visiting places like La Verneda, an adult education center organized on democratic principles developed by the Brazilian educator Paulo Feire; studying Barcelona's Sants neighborhood and touring with an architect who was working on the project, which is transforming an old factory into a community center complete with a library, carpenters workshop, and social gathering spaces.

The students also studied Barcelona's history, which included tours of  Barcelona's Roman ruins, the medieval Jewish neighborhood, and a bomb shelter from Spain's Civil War (1936-39). And, there was plenty of time for fun, including a Tapas-Making workshop, which turned out to be one of the students' favorite activities.

While in Barcelona, the students blogged about their observations, perceptions, and experiences, sharing insights on a wide variety of topics.

For Marie Brazille ‘21, this trip marked the first time traveling on an airplane.

“I was so nervous about being on a plane and being in another country that my anxiety took on physical symptoms,” admitted Brazille. “However, the flight was not as scary as I’d always imagined, and I quickly figured out that I worried about that for nothing. Flying actually ended up being a great experience despite the cramped space. I could have looked out the window the entire seven hour flight between JFK and Madrid. The view over each city took my breath away; there was nothing more exciting than when he plane descended and I could see for miles.”

Brazille shared that studying away in Barcelona allowed her to experience all kinds of new things, and not just the typical tourist attractions, though some of those, especially the view from the top of the Sant Maria del Mar and the decoration of La Sagrada Familia were highlights of the adventure.

“I think I can safely say I’ve gotten the most out of this trip that I possibly could have. I’ve kept an open mind at all times trying to observe and take in as much as I could. The things I’ve experienced and learned while abroad will stay with me for the rest of my life, so when I’m at home, I hope the ways I’ve grown as a person stand out to everyone more than any of the stories I tell.”